More core exercises!  Pulling cables again.
Posted by cpolsley at 9:18 AM No comments:

More core exercises and legwork: pulling cables while standing.
Posted by cpolsley at 10:03 PM No comments:

Coming back to 3D printing.  Last year I posted about designs for printed KAFOs (see posts from April 20, 2017 and May 15, 2017).  Now researchers are printing “neuronal stem cells derived from adult human cells on a 3D-printed guide” (quoting from study co-author Michael McAlpine).  That’s a mouthful.  What it means it that 3D-printed cells are put on top of a silicon 3D-printed guide, then the guide is surgically placed in the injured part of the spinal cord.  The guide is a bridge across the injury site.  If nerve cells above and below can connect, there is a good possibility that the living cells will work together for more recovery.
Posted by cpolsley at 4:25 PM No comments:

Two notable studies on SCI treatment have been featured in the news lately.

In the first study, scientists looked at how neurons are excited by epidural electrical stimulation (e-stim).  They wanted to find a way to simulate the same motor effects through chemical compounds.  The team tried injecting mice with different compounds for 8-10 weeks.  One particular compound, CLP290, helps to produce a certain protein linked to neuron response.  According to this Newsweek article, 80% of the mice injected with CLP290 “were able to take steps after four to five weeks of treatment.”  It is possible that injecting CLP290 into the bloodstream after a spinal cord injury could have positive effects for humans, as well.

The second study has to do with an enzyme that reduces post-SCI inflammation and scarring.  Injecting the enzyme as soon as possible after the injury may mitigate secondary damage.  Less inflammation (for example) means less tissue damage, meaning more cells can survive — and meaning more potential recovery.  Five days of the treatment “resulted in significant functional recovery” for the mice who were injected, explains researcher Angela Ruban. 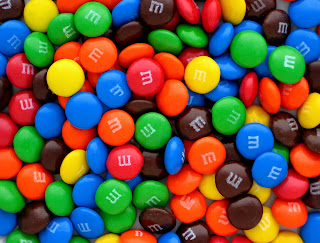 Progress on both counts - although if you're invested in the 2009 study on Brilliant Blue G and SCIs (popular with many!), it probably isn't the time to stop eating your blue M&Ms just yet.

Posted by cpolsley at 4:44 PM No comments:

I've been trying new core exercises recently.  One of them is working with an exercise ball.  This helps build abdominal and back control around/ below the injury site, but it also has a good effect on leg muscles.  Exciting to me that there are more leg muscles responding!

Core exercises focus on the area around your spinal column.  They are actually recommended for just about everyone.  These exercise suggestions can fit into many workout routines, but are geared toward people who are in rehabilitation from back injuries. 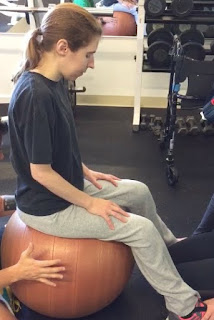 Developing an exercise regimen can be difficult for anyone.  After a spinal cord injury, there are many extra factors to consider.  Mobility limitations, poor bone density, and improper temperature regulation are a few examples.  But beyond that, how can you build on what you have?  Flexing counts as an exercise.  Staring at a toe and willing it to twitch counts as an exercise.  What big or small abilities will help you reconnect neural pathways?  Do you have equipment at home?  Be creative but cautious (this is not an endorsement, but one of my earliest exercises was standing at the kitchen sink with my knees blocked: see my earlier post entitled "The Benefits of Standing," dated January 26, 2017).